Connection Between Your Hand Structure and Writing Ability

Connection Between Your Hand Structure and Writing Ability

Humans are the only animals who think abstractly. As the human hand is an organ of performance, it is not amazing that the hand should "manipulate" the human language. Due to the hand's significant adaptability to functional requirements, as compared with the specialization in the forelimb of other animals, the hand is mostly responsible for the creative manifestations. Therefore, it characterises the human species and distinguishes it from all other known forms of life. Therefore, here I am explaining one by one how to hand structure supports your writing ability.

Hand Structure and its contribution to holding a pen

The bones and muscles of the thenar and hypothenar eminences control the mobility of the thumb and little finger. The metacarpal region is not heavily muscled but controls upon basal phalanges of the fingers.

The radial nerve originates from the brachial plexus. It is the principal nerve of the extensor group of muscles. It provides cutaneous sensory innervation to most of the back of the hand and controls the movements of the thumb and part of the index and middle fingers. It plays less part in the sensory function of the hand.

The median nerve controls the whole radial division (the Thenar eminence and space below the index finger) and middle of the palm (space below the middle finger and half below the ring finger). The same nerve also innervates the fingers which belong to these zones (thumb, index, middle, and part of ring finger). We describe this part as the zone of consciousness and ego and social comportment in palmistry. Among the three hand nerves, the median nerve is the most complex nerve. It helps different functions of sensations like light touch, temperature, pain, sense of position, sense of weight, and the sense of discriminating objects.

The ulnar nerve is spread over the ulnar side of the ring finger, entire of the little finger, and the ulnar division of the palm. We describe this part as the zone of imagination and the subconscious in palmistry. It provides all forms of sensations but has fewer Pacinian bodies than the median.

Fingers are the implements of the sense of touch. It helps us to obtain information about the outside world. They involved man’s highest functions like a process of acquiring knowledge and understanding through thought. When we take in to consider the evolution of the hand, finger length and the development of complex and varied patterns of their papillary ridges are taking a remarkable place. Human fingers are significantly different from simian fingers because of their highly differentiated tactile sense and possess a high degree of mobility. Three jointed forms and variable lengths assist to do a rich variety of moments. They are implements that transform thought and impulse into visible expression.

Thumb holds a significant position in the hand in human evolution. Because of the exceptional mobility and angular insertion of the thumb, humans experience the tridimensional shape of objects and are able to judge the distance between two points, which is the source faculty of whole knowledge of space. Thumb can co-operate with all other fingers, its position and mobility manage the physiognomy of the whole hand. The human thumb reached higher development than contrasting in apes' and monkeys' thumbs.

While the vast majority of scientists have never paid any attention to the crease line system, the other line system of the hand is that of the papillary ridges, the fine, close-set, evenly spaced lines which cover the whole palmar surface including the fingers. It has been a fascinating subject of scientific research since the days of Malpighi in the seventeenth century. The results of this research have thrown new light on the evolutionary history of man and also on forensic medicine and criminology, in which ingenious methods have been devised for identifying individuals by their fingerprints.

The papillary ridges cross the palm in several directions and form varying patterns on the eminences at the base of the fingers and greater complication, on the fingertips. Where they surface the pads on the palm and fingertips special nerve cells called Puccini bodies are concentrated in great numbers, forming the vehicle of the sense of touch.

Usually, the pattern of the friction ridges on human fingertips differs widely. According to Vaschide that the tendency to morphological variations of the sense of touch increases from the little finger to the thumb. The fact deserves attention.

Approximately 17,000 mechanoreceptors (receptors that reply to sensations of touch) reside in every human hand, with the majority clustered in your fingertips. Your fingertips’ ridges, which form up the loops and whorls seen in your fingerprints, maximize surface area for increased touch sensitivity. And these tiny receptors are incredibly discrete. They help your fingertips observe a feature as tiny as 0.2 mm, more or less the dimensions of 2 human eyelashes, through static touch (a single stationary tap of your fingers).

Functions of the thumb, the index, and the middle finger are the most developed among the five fingers. They are charged with many special activities in which the other fingers take very less part or none. Example – pointing, writing, drawing and painting and etc. It will be seen that Vaschide’s observation confirms the above-mentioned theory that the zone of the thumb and index is correlated with conscious thought and the Ego. Highly differentiated and complex capabilities of the human brain use the thumb, index, and middle finger, especially the first two, as the instruments of their expression. Previously I have mentioned these three fingers are the most mobile fingers. Also, it is the keenest sense of touch. In monkeys, the radial zone remains undivided from the rest of the hand. Therefore, the thumb and index are superior neither in mobility nor in the sense of touch to the other fingers.

It is the high degree of variation in human fingerprints that have permitted their use for purposes of identification. But so far fingerprint experts have hardly touched on the psychological implications of their study.

When an individual is having difficulty becoming skilled at their handwriting grasp it could be an indication of developmental concern. The best example is when we compare normal humans vs deformed hands with their writing abilities contrasting differences prove the above details. 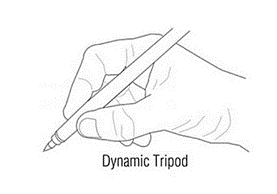 Figure 1 - The correct way to hold a pen

Good graphomotoric skills allow relaxed and fluent writing of an individual. The correct way to hold a pen is a three-point grip, in which the thumb and forefinger grip the pen, which is placed on the front part of the middle finger. The thumb and forefinger guide the pen. Contrastingly the majority of individuals who are having neurodevelopmental disorders have poor graphomotoric skills. Here are some examples of difficult methods of holding a pen that will adversely affect the flow of writing and speed. These holding methods can be seen high percentage on individuals who are having neurodevelopmental disorders.

Though there are many variations that are possible it is important to hold a pen correctly because, after the age of 6, it is very difficult to correct and change the pen holder. 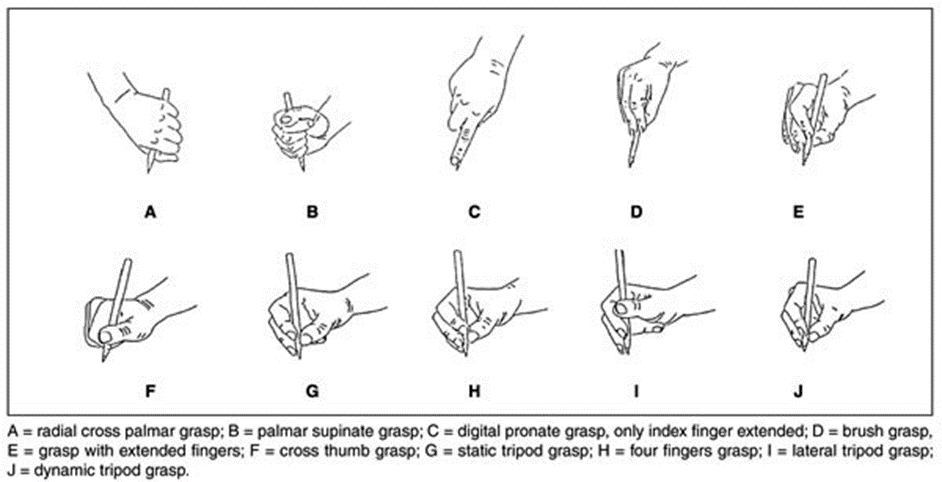 To learn more, visit Sherlock Institute of Forensic Science India where the team of expert professionals and certified faculty provides you with a great opportunity to Learn Forensic by attending different Forensic events being organized from time to time and also by registering yourself into Forensic Courses and Training Programs both online and offline mode. You can also visit our Youtube channel for all the events.

Note - If you want to have an access to a hub of Forensic Books, Study material and all updates then join us on Telegram.

Craig L Taylor, Ph.D.,1 And Robert J. Schwarz, M.D.2 The Anatomy and The Mechanics of the Human Hand